Have you ever heard of an endogenous opioid peptide? It certainly is a mouthful. I had no clue what it was until I was first introduced to the term Enkephalin in an anatomy audiobook from Audible. The lecturer was listing off advances in peptide research. Then I read about enkephalin in Kiiko Matsumoto & Steven Birch’s book Reflections on the Sea. They mentioned that notable studies were correlating an increase of enkephalin with patients receiving acupuncture treatments. I found this to be so fascinating that I wanted to know more distinctly what enkephalin looks like and how it operates.

Picture of enkephalin structure below

Biochemistry has done a great job of exploring the mechanisms of these endogenous peptides, but I wondered more about how acupuncture could elicit or provoke the release of enkephalin. I scavenged research such as the following articles / books:

This book compiled many different research experiments and compared the literature & statistics. It seemed like the actual points, depth of insertion and intensity of manipulation were not scrutinized exceptionally. They had methodologies that compared chemical profiles of animals, before & after acupuncture. I found the following excerpt to be very informative:

Substances like Naloxone are opioid receptor antagonists. This substance blocks the effects of opioids by shielding or de-activating the receptor. Naloxone is widely used as a remedy for opioid overdosing, and is being sold over the counter in many states now to combat the drug epidemic in America.

Check out the similarities between Enkephalin and Morphine 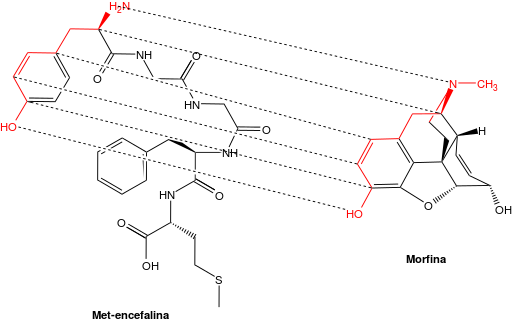 By Dannybalanta (Own work) [CC BY-SA 3.0 (http://creativecommons.org/licenses/by-sa/3.0)%5D, via Wikimedia Commons

Morphine itself also comes from older medicinal traditions, namely Herbalism. The herb Ying Su Ke (Poppy husk) has been used within the Chinese herbal pharmacopeia for a long time. The actual opium war was not due to Ying su Ke, but rather British imports and imperialist trading habits that inundated China with strong opium (though it was nothing compared to modern pharmaceutic productions). That caused all sorts of trouble, and I wager we’re seeing history repeat itself presently in the context of America’s opioid crisis. Acupuncture could be the key to positive change in the healthcare of our country, by circumventing the need for chemicals to relieve patients of their suffering.

Acupuncture is widely used in drug detoxification and for suppression of symptoms of addiction. Associations like NADA—National Acupuncture Detoxification Association, certify healthcare providers of all realms to perform an auricular protocol that was developed for meth and heroin addicts. It might be anticipated that the activation and proliferation of endogenous opioids helps to level out the body’s cravings for chemical stimuli. I am starting to see how acupuncture can be good for both pain relief, as well as reducing stress of those recovering from addiction and withdrawal.

Unfortunately, it seems if a person is taking Naloxone while receiving acupuncture, the pain relief effects are greatly diminished. Enkephalin relies on the availability of opioid receptors, though one might wonder if the body still accumulates the peptides, and if they can be absorbed after Naloxone is excreted. The following research on mice could help explain:

Electroacupuncture in awake mice produced analgesia to noxious heat stimuli causing a 54% increase in latency to squeak. Subcutaneous naloxone completely abolished this acupuncture analgesia implicating endorphin. Naloxone injections in control mice caused a 17% hyperalgesia suggesting that “normal” mice also release endorphin. These results imply that endorphin is released at a low basal rate in “normal” mice, and at a much higher rate during acupuncture.

There is a ton of research regarding this subject, and it is very promising to see biochemistry helping to bridge the gap of efficacy and understanding within the realm of Acupuncture. And, in spite of Naloxone, I believe there are many other vectors and mechanisms of acupuncture that can relieve pain and improve bodily function (check out this article to learn more about that). So, even those with Naloxone prescriptions could find it beneficial to some degree, especially if they are seeking to diminish all chemical consumption.

Enkephalin is definitely a key player in understanding acupuncture and, really, the way pain works in response to stress and other deleterious effects of living on this planet. I will continue to explore how peptides, neurotransmitters and other chemicals promote amelioration in the body. Stay tuned, and maybe schedule an appointment so we can get some enkephalin brewing in your body!

3 thoughts on “Enkephalin, the Acupuncturist’s Opioid”